another set of Wood Ducks and babies

Egret - Oh how I love this bird

On Monday and Tuesday my friend Jen visited me for a couple days of birding and photography. Just as important to help me get through the loss of my dog Rocky. We wandered from marsh to marsh to park to red tail site enjoying a vast assortment of wildlife and birds not to mention tons of ant bites lol. By the end of day we were both exhausted with hundreds of photos to look at. I will give you just a sampling of the thousands of photos we took. Enjoy
Posted by Ann Brokelman at 7:58 AM No comments:

Every where you look you see babies. Stayed home this morning and afternoon and watched the orioles feed the young in my front tree. Love to listen to the chatter. In the other front tree the house sparrows were busy feeding their young. A couple photos.
Posted by Ann Brokelman at 11:22 PM 1 comment:

For months now I have have a lot of orioles (male, female and juvenile) feeding at my oriole feeders in the front and back yard. Yesterday I saw my first two baby orioles. They were sitting on the hydro line and the female was dashing back and forth from the tree to feed the babies. I quickly grabbed my camera to rush out and take some photos. The babies were constantly chirping and the female never stopped dashing back and forth finding food. Occasionally she went to the feeder for a drink then back to the tree looking for bugs or whatever for the baby. The male was in the tree watching.
Posted by Ann Brokelman at 7:21 AM No comments:

Male with mohawk with lunch

2 eyas on the fence

Went out to see visit the red tail hawks that just fledged a week ago with Jen from Innisfil. We met up with Victor and started to look for them. Victor took us to the usual haunts and then we saw one hawk up in the sky. Very quickly we heard the eyas calling. There on the schoolyard fence were 2 eyas and the male. In a tree close by was the female and in the playground the last eyas. What an amazing site - all 5 together. Mr. Mohawk had talon full of food and the eyas were crying for it.

Took some shots - Victor thanks for a wonderful morning in your area.
Posted by Ann Brokelman at 10:37 PM No comments:

Sad Day for my family - My Beautiful Beagle Rocky Passed Away June 21, 2009

My beautiful beagle Rocky who was 9 years old died today. He will be missed by our family. He was the best family pet ever. Loved to sleep, eat and play with his toys. Loved to be with us and do anything we wanted. Man what a great boy and what a sad day for us.
Posted by Ann Brokelman at 6:20 PM No comments:

Northern Flicker and baby being fed June 15, 2009 (double click on image to enlarge)

Carol, Sandra and I were able to see the northern flicker feed the baby. At one point the baby tried to grab at the parent for more food. The most amazing surprise of all was seeing Rob McKay's mom Sue and her friend Bruce at the park. Rob was the hawk watcher photographer at Rosetta until he moved to Calgary. He is a truly amazing photographer and his now working at a professional level out west. Meeting his mom out of the blue was wonderful.
Posted by Ann Brokelman at 9:27 PM No comments:

1st one to leave the nest

eyas in the nest - jumping from branch to branch

It was thrilling to be able to see the first eyas at the 2nd location fly. WOW. I stopped in this morning and Janefer and Victor joined in on the street corner and the eyas decided it was time to fly - he did great - he flew across the road, across the neighbours house and into the tree. Yahoo. The female was in the tree across the tree watching. The second little eyas was hiding in the nest. The female was very aggressive trying to get him/her out to fly. She was pushing him around and vocal. She left and dad arrived at the tree with the first eyas with food. He then took the food to the nest. Want food come back to the nest. The male left the nest. Well then the fun started again - the eyas in the nest decided before he got into more trouble he better get active. He jumped from branch to branch, up and down for quite from time. What a show. Then the thrill of all we see a red tail land on the house. We all assume it is the dad. (1 eyas in nest, 1 eyas in the tree, mom in the south tree so it must be dad) NOPE it is another eyas. I couldn't believe my eyes. I had to run to have a look on the other side of the house but yes it was a 3 eyas. OK it was very exciting and I have some shots of all 3 eyas. Enjoy.
Posted by Ann Brokelman at 6:27 PM No comments: 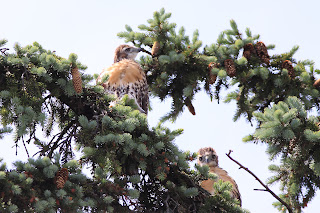 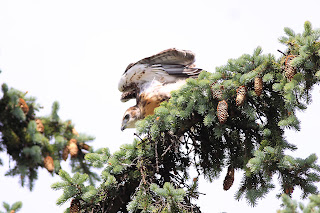 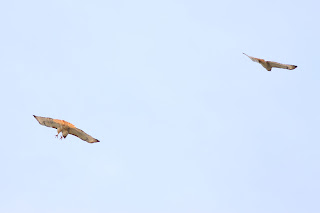 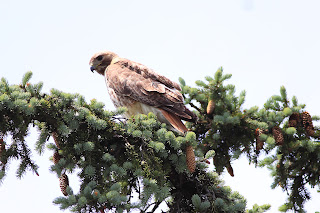 Posted by Ann Brokelman at 6:46 PM No comments:

Red-Tailed Hawk with an attitude and mohawk June 10, 2009 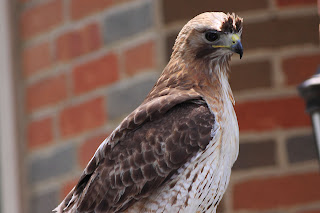 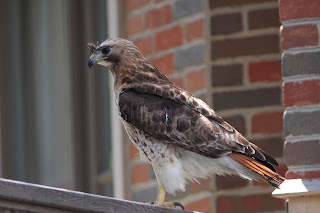 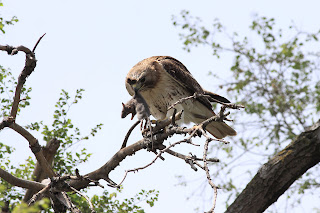 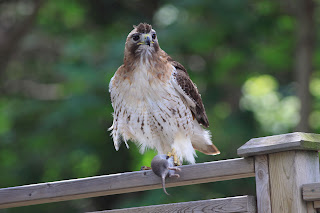 Today I saw the most beautiful red-tail ever. He has the cutest mohawk I have ever seen. The nest has 2 eyas and of course a female. I will post photos later today of the eyas and female. The male was very busy hunting and came up with this large rat. Enjoy this beautiful bird. Thanks to Linda, Janefer and Janefer's husband for their hospitality. What a great neighbourhood.
Posted by Ann Brokelman at 6:23 PM No comments:

Other Photos Blogs by Ann 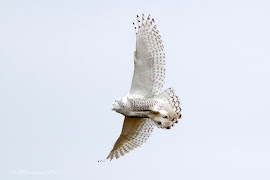 Ann Brokelman
I have a passion for photography. I use a Canon 7D Mk !! with a 400mm lens prime lens. I spend all my free time outside looking for raptors, owls, birds and wildlife. I enjoy watching birds in flight and listening to the calls of them. My favourite sounds are the calls of the red-tail hawk. I volunteer for Coyote Watch Canada, Shade of Hope, Toronto Wildlife Centre, The Owl Foundation. Check out my monthly On the Wild Side articles with Beach Metro News. Please email me comments questions to abrokelman@gmail.com

Make sure you double click to make the photos larger.

To View the photos larger just double click - will make the photos full size. to go back to blog hit the arrow. 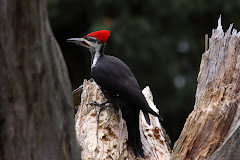 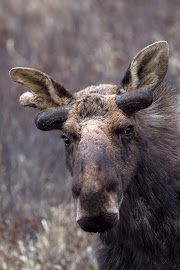